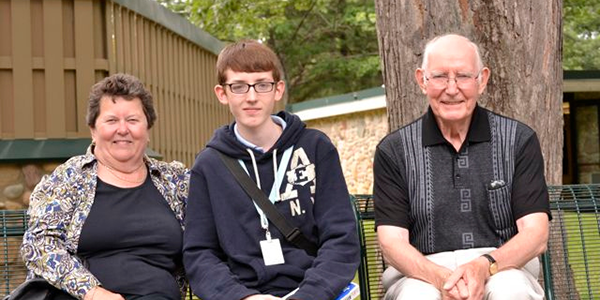 Martha and Jack Hicks of Ann Arbor, Michigan, are among those forward-thinking donors who have included Interlochen in their estate plans. Martha is a Camp alumna.

Originally from Mayfield, Michigan, Martha Kay (Blackhurst) Hicks began her percussion training under the guidance of Richard Maddy in junior high school in Kingsley, Michigan. She attended Interlochen's National Music Camp for the summers of 1954, 1955, 1956, and 1957 as the recipient of scholarship support from Mark and Helen Osterlin of Traverse City, Michigan, both of whom served Interlochen for decades in a variety of roles. Martha recalls that Interlochen exposed her to a world of music and competition.

"The Interlochen experience," she says, "opens up a new perspective on what one can do, and teaches the skills to do it."

Martha was interested in both music and mathematics/science, and ultimately chose engineering as her post-secondary field of study. She asserts that "the Interlochen experience broadens the individual and teaches the discipline to succeed in any chosen field."

Beth Stoner, Associate Vice President for Advancement, has known Martha and Jack Hicks since the 1990s, when the couple began to support Interlochen. "I believe Martha has an appreciation for, and pride in, the standard of excellence at Interlochen," Beth relates. "Her philanthropy is rewarding to her, a joyful thing."

In 2001 the couple established an endowed Camp scholarship that supports one camper each year, a percussionist with financial need. Martha, who often attends Interlochen's summer alumni weekend, is motivated by the chance to give back for the scholarship from which she benefited as a child.

"We come every summer to meet our scholarship recipients and hear them perform," Martha says. "And we often stay in touch with them after they leave Interlochen. Because of our contact with our students, we find our Interlochen scholarship to be one of our most enriching philanthropic endeavors."

The planned gift that Martha and Jack have set up to augment endowment funds at Interlochen, Martha says, was created "because Interlochen is a great institution, where, we believe, our funds will be well spent by touching the lives of many young people."