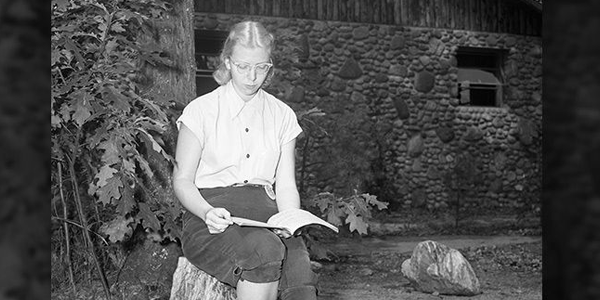 Donna Brunsma's musical path began at Interlochen, and it will last forever. Before Donna passed away in 2017, she made sure she could continue helping new generations of Interlochen Arts Academy students. Her estate gift to Interlochen created an endowed scholarship for students majoring in voice or organ studies that will last in perpetuity.

Donna began as a Camp student in 1949, returned in the 1950's as staff to help
prepare the University of Michigan's opera offerings, and spent the last 20 years of her "retirement" teaching Italian diction to Academy students. She brought a wealth of experience to Interlochen having worked with people who stand as pillars in the world of vocal music, including Renée Fleming. She traveled the world—Italy, France, Brussels, Chicago, New York, Lisbon, Spoleto—working with international stars. All the while, Interlochen remained a core element of her life. She returned frequently, helping students with their Italian diction and enjoying lunch in Stone as the only compensation she would accept from Interlochen.

She touched the lives of many students, including American baritone Carlton Ford (IAA 02-05) who is a major gift officer in the Interlochen Advancement Office. Carlton is a graduate of The Juilliard School and Rice University, and has performed across the country including in Carnegie Hall and Lincoln Center.

"Donna taught me how to speak Italian, and most importantly, Donna taught me how to inspire others to dream big by pressing against their perceived limitations. I would stand there and sing, in an attempt to access every ounce of wisdom Donna had supplied me, and there would be Donna accompanying from the keys—one eye on the sheet music and one eye on me. Donna Brunsma was a silent hero who changed the course of my life forever."

During her lifetime, Donna rose to a level of excellence and respect that few achieve. Her generous planned gift assures that her voice will always be heard at Interlochen--and will inspire countless new vocalists and organists who come to Interlochen to live their dreams.