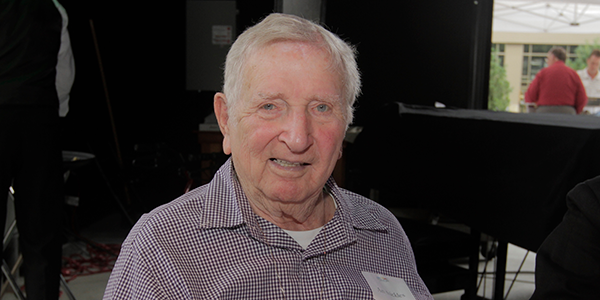 Art Stickles and Interlochen Center for the Arts "grew up" together, a circumstance that has helped create an extraordinary institutional advocate.

"Interlochen is a great organization; I love it, so I support it," he says.

As a youth, Art lived periodically with his great aunt, a local resident who attended almost every Interlochen concert. Later, when his business concerns took him to Detroit, Art returned to Interlochen for weekend and summer-long visits.

His relationship with Interlochen contains an element of pride in how the campus and its impact have evolved over his lifetime. "I was seven years old when they were building the Interlochen Bowl," Art recalls, "before the Camp had electricity."

"Art has always been interested in our physical plant," notes Interlochen's Associate Vice President for Advancement, Beth Stoner. "He is a businessman, and enjoys thinking about Interlochen as a business entity."

Art has found, through countless conversations he has initiated about Interlochen, that his focus on financial matters is not unique.

"When I head to Florida for the winter every year, I bring literature about Interlochen with me to distribute at church clubs and dinners. People want to know how a place like Interlochen is funded," he explains, adding, "I'm good at getting that idea across!"

Though not an artist himself, Art has gained a deep appreciation for the level of artistic talent that he has found at Interlochen over a lifetime. He has made plans to keep investing in this life experience long into the future.

"I put Interlochen in my estate plans by setting up a Charitable Gift Annuity. This is an account that will pay me an income for the rest of my life at a higher rate than the bank would give me," Art says. "Some people can give just to give, but for people who need the income for retirement, this mechanism allows you to give at a high level from modest means to support an organization that has enriched your life."