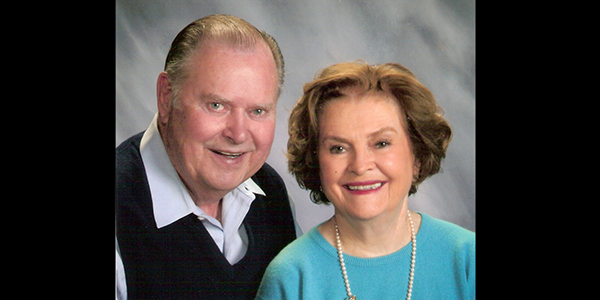 More than forty years ago Tom and Dot Corson and their daughter Claire paid their first visit to Interlochen as part of a family trip. "It's hard not to get excited about Interlochen when there's so much creativity in the atmosphere," Tom recalls. And later, when Claire attended Camp, her parents wound up visiting every weekend of her 8-week session.

Claire majored in choir and theatre, and participated in the operetta. At summer's end, she told her parents that she had heard about a scarcity of scholarship support for theatre students. "So, we walked over to the administration building," Tom explains, "and said we'd like to establish a scholarship for Campers majoring in theatre." Thus began a four-decade legacy of support for Interlochen that the Corsons have made certain will extend far into the future.

Tom Corson co-founded Coachmen Industries in 1964, becoming President and Chairman the following year and retiring as CEO and Chairman in 1997. Claire Corson Skinner succeeded Tom for eight years prior to her retirement in 2005. "Claire went to law school and traveled extensively, participating in Moot Court," Dot comments. "She says she never could have done that without her Interlochen theatre training." Now Claire volunteers at a community theatre in Naples, involved both with productions and as a board member.

Tom served as an Interlochen trustee from 1973 to 1996 and is now designated a Life Trustee. He and Dot remain active ambassadors for the institution. "We always tell people about the talent and motivation of Interlochen students, and how they are inspired by the dedication of the faculty, staff, and administration," notes Dot, adding, "All they have to do is attend a student performance to know why we recommend Interlochen."

The Corsons have included Interlochen in their estate plans. Tom says that making a planned gift to Interlochen is "one of the most satisfactory things we ever did. We love the fact that so many students have already benefited from our giving, and have moved on to leadership roles around the world.

"It's a wonderful result," Tom concludes, "and with our bequest we have made a commitment for that to continue."